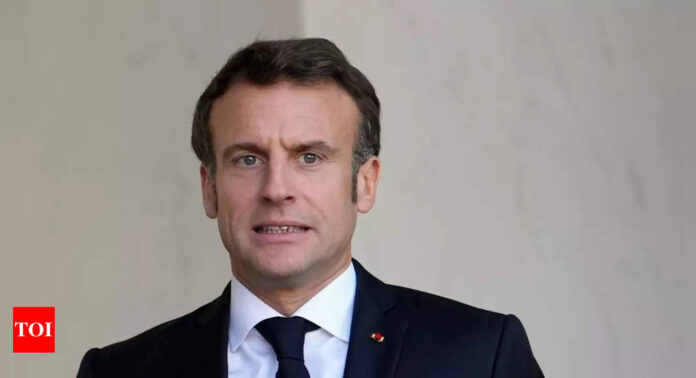 PARIS: France is set to become the first Western country to deliver tanks to Ukraine, the French presidency announced Wednesday after talks between Emmanuel Macron and Ukrainian counterpart Volodymyr Zelenskyy.
The move to supply the French-made AMX-10 RC to Ukraine — a light tank model in service since the 1980s that is being phased out in the French military — represents a significant shift in French military support for Ukraine.
Paris has already delivered state-of-the-art artillery, armoured personnel carriers, anti-aircraft missiles and air-defence systems to Ukraine, but Macron has long been wary of antagonising Russia and breaking off diplomatic contact with Vladimir Putin.
“The president wanted to increase… aid” to Ukraine “by accepting to deliver AMX-10 RC light tanks”, an aide to the French leader told reporters on condition of anonymity after the call between Macron and Zelensky.
“It is the first time that Western-designed tanks are supplied to the Ukrainian armed forces,” he said.
NATO allies have gradually ramped up their military support to Ukraine since February last year, delivering increasingly sophisticated weapons systems while also publicly worrying about the risk of escalating the conflict with Moscow.
Transfers of fighter jets, long-range missiles and tanks have long been viewed as potentially provocative, risking a more direct confrontation between Russia and the West.
It was not immediately clear how many of the French tanks would be dispatched or when they would be delivered, though training and maintenance has been agreed as part of the deal.
The French defence ministry said the countries’ defence ministers would soon hold talks.
The AMX-10 RC tanks are light and six-wheeled, rather than on tracks.
They were designed for reconnaissance missions and have been deployed in France’s most recent overseas military operations in the Sahel region of West Africa and in Afghanistan.
They are “very mobile… perhaps old but high-performance”, a French official said.
Zelenskyy on Twitter said he thanked Macron “for the decision to transfer light tanks” to Ukraine, as well as Bastion armoured personnel carriers.
“Thank you friend! Your leadership brings our victory closer,” the Ukrainian leader added.
Macron has repeatedly riled his Ukrainian allies in the past as well as hawkish eastern European states over comments seen as focusing on diplomatic solutions to the conflict rather than Ukraine’s efforts to repel Russia’s occupying forces.
In June, he said “we must not humiliate Russia”. In December, he called for Russia to be offered “security guarantees” at the end of the conflict.
Macron has hardened his rhetoric against the Kremlin in recent weeks, however, accusing Putin of committing war crimes through his “cowardly” and “cynical” attacks on Ukrainian infrastructure.
In his New Year’s Eve message, the French leader addressed Ukrainians, saying: “We will help you until victory and we will build a fair and durable peace. Count on France and count on Europe.”
The presidential aide said that the French-made Crotale air defence system was already in action in Ukraine, helping guard against drones and missiles.
“These systems have arrived and are being used by the Ukrainians and are well received,” the aide said.