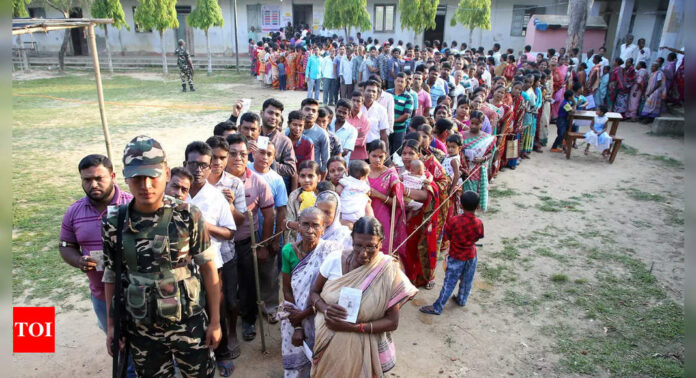 NEW DELHI: The first round of polls — in the northeastern states of Nagaland, Meghalaya and Tripura — of the nine slated for this year has been announced and the countdown to the big Lok Sabha battle next year begins in right earnest.
The three states in this round may be small and far away from the political centre but with BJP a major player in the region now, the results will set the mood for the coming big ticket contests.

A good show from the BJP will buttress its frontrunner status while any slip-up will give the opposition hope that the party can be defeated elsewhere too.
A brief look at the three states:
Tripura
Tripura will be of particular interest. All eyes will be on the BJP’s performance this time after its stupendous feat of ending CPM’s 25-year run in the state in 2018. It has not been smooth sailing for the party since then, changing its chief minister midway and facing desertions.
The Congress, after being the main opposition to the CPM for long years, had drawn a blank in the last poll. The two parties have tied up this time around, hoping that a united front could help trounce BJP.

The saffron party fought the last election in alliance with the Indigenous Peoples Front of Tripura and the tie-up is likely to continue.
The wild card this time is the Tipra Motha, a newly floated tribal party that swept the autonomous district council polls within months of its formation.
The party, whose main demand is for a separate Tiprasa state for tribals, is scouting for a partner to fight the elections and has reached out to the IPFT too. Tribals dominate around 20 seats in the state and the party is expected to do well there.
Meghalaya
The state is governed by the Meghalaya Democratic Alliance (MDA), which comprises the National People’s Party (NPP), BJP, United Democratic Party (UDP), People’s Democratic Front (PDF) and Hill State People’s Democratic Party (HSPDP).
After the last poll, the Congress had emerged as the single largest party with 21 seats but was far short of the 31 needed for a simple majority.

The BJP, which had just two seats, moved in and cobbled together a coalition with NPP and other parties.
However, things are not rosy between the BJP and the NPP and the latter is mulling going alone this time.
The BJP, which has consolidated its position in the last five years, will fancy its chances even as several MLAs from other parties have joined it.
The Congress has been the real loser here. After winning 21 seats in 2018, it is left with none at the moment after it lost all its MLAs to other parties. The Trinamool Congress drew a blank in the last polls but has eight MLAs now due to defections from the Congress and other parties and will be looking to build on that.
Nagaland
Like all earlier elections, this poll too will be fought in the shadow of the separatist movement and the demand for a separate tribal homeland in the eastern districts of the state.

The assembly’s composition underwent a major change last year when 21 MLAs from the Naga People’s Front, two from the National People’s Party and one from JD(U) merged with the Nationalist Democratic Progressive Party, taking its total to 42 from the 18 it had won in the polls.
The NDDP had formed the government with the BJP after the latter broke away from the NPF. The saffron party had won 12 seats in the 2018 polls, up from the solitary seat it had in the outgoing assembly.