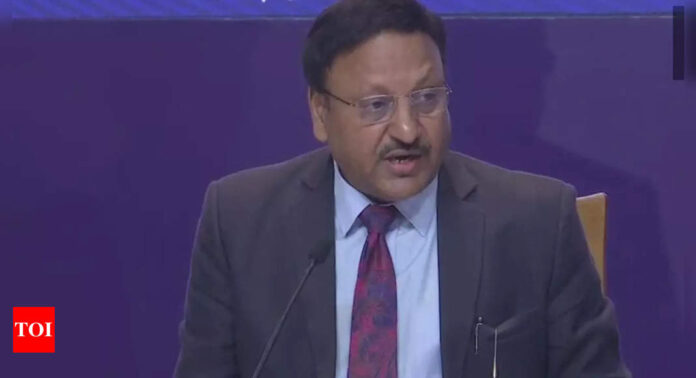 AGARTALA: The Election Commission of India (ECI) on Thursday said it is ‘committed and duty bound’ to conduct free, fair, and inducement-free elections in Tripura.
Chief Election Commissioner Rajiv Kumar said the ECI has taken all arrangements to allow voters to join the ‘festival of democracy‘ and if a voter faces any threat or intimidation on the day of polling, he or she can use cVigil app to inform the election authorities.
“We had an in-depth discussion on the election process with the Chief Secretary, DGP, representatives of political parties, DMs, SPs and enforcement agencies for two days. The election commission is committed and duty bound to conduct free, fair, violence-free and inducement-free election”, Kumar said at a press conference here.
Assembly elections in Tripura are due in February-March this year.
“All political parties will have to inform the voters about criminal cases if any of their candidates”, he said.
The CEC said each polling station will have a micro observer to ensure free and fair elections. Tripura has 3,328 polling stations.
Kumar said security personnel will be engaged in poll duties on the basis of randomization to ensure impartiality.
The CEC said there will be a three-ring security arrangement from polling station to guarding strong rooms with CRPF manning the first layer of security. The Centre has already sent 100 companies of security personnel to Tripura for the Assembly election.
“DEOs and SPs were asked to provide level playing ground to all the political parties during the election process”, he said, adding webcasting will be done in all the polling stations without any failure.
Kumar, who arrived here on Wednesday along with two other Election Commissioners said that the banks and RBI will keep a close eye on the movement of cash in bulk. Besides, close vigil will also be kept at the airport.
To a specific question on the law and order situation, Kumar said, “We had detailed meetings with top security officials and central agencies. It is very reassuring and extremely reassured. They all are on duty and serious. I am confident they will deliver. If there is any laxity or negligence, appropriate steps will be taken”.
Earlier, the full bench of ECI held separate meetings with representatives of political parties and sought their views on the election process.
CPI(M) state secretary Jitendra Choudhury said the party has submitted a memorandum before the ECI full bench urging it to take all possible steps for free and fair elections.
“A sizeable number of electors could not cast their votes after 2018 assembly elections – be it Lok Sabha, civic bodies and last year’s by-elections to four Assembly constituencies. We categorically urged the ECI team to ensure voters could exercise their voting right without any violence, threat and intimidation”, he said.
At the meeting with the ECI team, Congress MLA Sudip Roy Barman also demanded free, fair and impartial elections. “We requested the ECI team to take all possible measures so that the people could exercise their democratic rights without any threat or intimidation”, he said.
BJP vice president, Ashok Sinha, who met the ECI team also advocated for free and fair assembly elections.
“We met the visiting ECI team and urged the poll panel to conduct the election free, fair and peacefully”, he added.