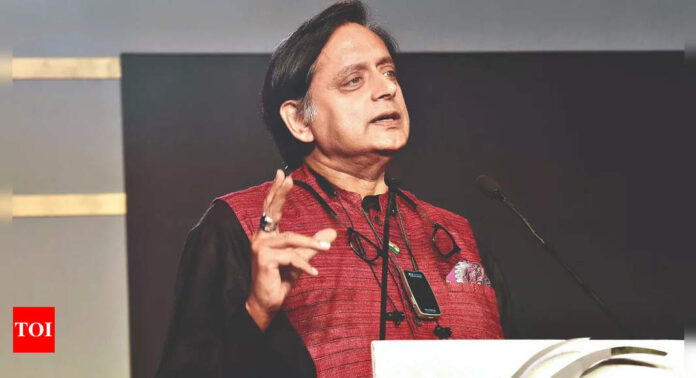 KOTTAYAM (KERALA): Unemployment rate among the youth in Kerala is huge and there is a need to make the state more attractive for its younger generation to prevent them from going outside for jobs, Congress MP from Thiruvananthapuram Shashi Tharoor said on Monday.
Tharoor, speaking at the inauguration of the 146th Mannam Jayanthi celebration at the Nair Service Society (NSS) headquarters at Perunna in Changanassery here, said unemployment among the youth in Kerala was 40 per cent in June 2022.
Mannam Jayanthi is held to celebrate the birth anniversary of NSS founder and social reformer Mannath Padmanabhan.
He said only Jammu and Kashmir was in such a situation, but that was due to militancy problems there.
“No other state is showing such concerning figures of unemployment among the youth. In other states those uneducated or unskilled are the ones lacking jobs. However, in Kerala everyone is literate, educated and has passed class 10, yet a lot of them do not have jobs,” the Thiruvananthapuram MP said.
Tharoor said 3.5 lakh professional and technical job-seekers, including 9,000 medical graduates, were registered as job-seekers in the southern state’s employment exchange.
Of the 3.5 lakh job-seekers, around 71 per cent have ITI certificates, he added.
“This is the state of affairs in Kerala. Therefore, there is no doubt that the state needs to open its doors to bring in more investment. We need to create more employment opportunities,” he said.
The MP said that a lot of youngsters are going outside the state for job opportunities and that should be seen as a loss for Kerala.
“We must make Kerala more attractive for our young people,” was a solution he offered.
Sukumaran Nair, the general secretary of NSS, said during the event that when Tharoor came to contest polls from Thiruvananthapuram, he had called the latter ‘Delhi Nair’.
“To rectify that mistake we have invited him here for this event. According to me, there is no one more competent to inaugurate the celebrations,” Nair said.
The praise of Tharoor by Nair was welcomed by senior Congressman and leader of opposition in the state assembly VD Satheesan.
“I welcome any praise of a Congress leader by anyone here in Kerala,” he told reporters.
Satheesan had recently initially expressed reservations over the Thiruvananthapuram MP’s political outreach programmes in the southern state.
When the alleged rift between Satheesan and Tharoor was widely reported by the media, the LoP had refuted the same.
In his speech on the occasion, Tharoor also said Padmanabhan, who founded the NSS, had once observed that one Nair cannot see eye-to-eye with another.
He said though the observation was made more than a century ago, he has witnessed it during his political career — an apparent dig at a few fellow Congressmen from the Nair community.
Interestingly, Satheesan also belongs to the Nair community.