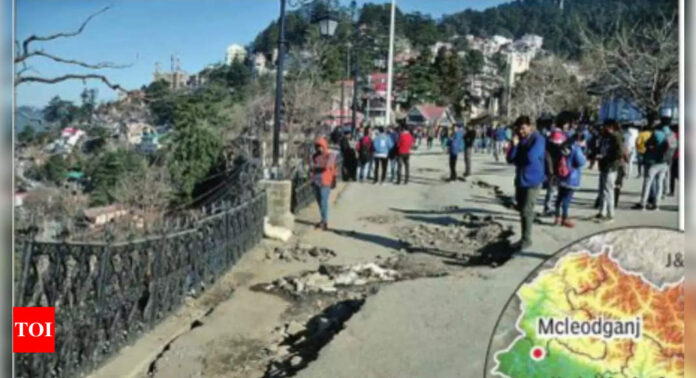 Himachal Pradesh’s capital Shimla is sinking under its own weight. More than 25% of old Shimla’s core, including the historical Ridge, Grand Hotel, Lakkar Bazaar and Ladakhi Mohalla, lies in a sinking zone and has been declared unsafe in many geological surveys and studies. Experts blame unregulated construction, deforestation and slope-cutting for the land subsidence.
Founded for a population of 25,000, the city is estimated to house 2. 3 lakh people now. To make matters worse, buildings have been allowed on slopes of up to 70 degrees, even though Shimla lies in seismic zone IV.
“Construction weight and fragile geology are creating sinking zones in Shimla. The seepage due to poor drainage has further weakened the soil underneath, making the land sink,” says Sreedhar Ramamurthi, a geoscientist and managing trustee of Environics Trust, a New Delhi-based research and community development organisation.
The first warning signs appeared in the early 2000s when people noticed huge cracks on the sprawling Ridge that has landmarks like Christ Church and the State Library. Many attempts have been made to repair the Ridge that covers a 10-lakhgallon water reservoir from the British era.

Taking note of the situation, the National Green Tribunal (NGT) in 2017 banned all construction – residential, institutional and commercial – in Shimla’s core and green areas. The Dehradunbased Wadia Institute of Himalayan Geology also made the same recommendation that year.
However, the state government brushed aside all warnings. In its Shimla Draft Plan, 2041 (SDP-41) notified lastFebruary, it proposed to allow construction in the core and green areas, including the sinking zones, if certain conditions like clearance from a geologist were met. When the NGT quashed SDP-41 and termed it illegal last October, the state moved the Supreme Court and the case is pending there.
“The government has been persistently trying to allow construction in these areas only because the real estate prices are high there,” says Yogendra Mohan Sengupta, an environmentalist whose petition led to NGT’s 2017 ruling. “It has been praying since 2019 in the SC for lifting the ban on construction in the sinking zones. The government actually tried to get around the ban by allowing constructions in SDP-41. ”
Sengupta says the city has already crossed the tipping point. “Shimla is like an overweight person with weak knees. It’s over-populated, and prone to landslides and earthquakes. A minor natural or man-made disturbance can trigger a total collapse of this town. And if the Ridge goes down, it will open the floodgates for the lakhs of gallons of water stored there. ”