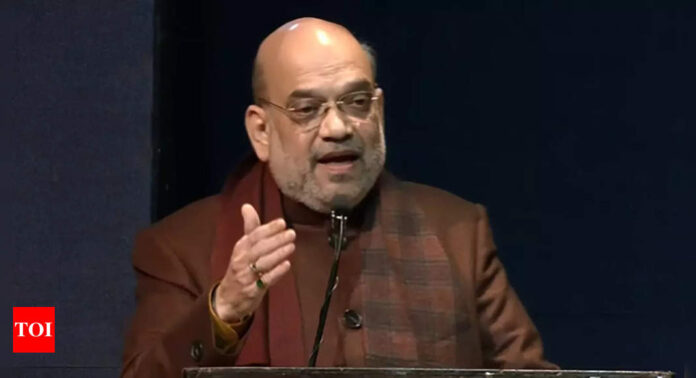 NEW DELHI: Armed struggle for India’s Independence, including the First War of Independence in 1857, was as important an ingredient as the Congress-led non-violence movement in liberating India from British rule, home minister Amit Shah said here on Wednesday. However, he added, there were attempts by historians to overlook or undermine the contribution of armed struggle and revolutionaries in securing the country’s Independence.
“Indians have been fed only one viewpoint and narrative through history books, educational curriculum and hearsay, whereas many individuals, ideas and organisations had valuable contribution in Independence of the country…There have been attempts to ignore and not give due recognition to the contribution of these armed revolutionaries,” Shah said at an event to launch the book ‘Revolutionaries — The Other Story of How Indian Won Its Freedom’ by economist Sanjeev Sanyal.
The home minister stressed that history must be written not merely on the basis of victory or defeat but reality by recording the efforts made to put up an armed resistance to British rule, besides evaluating and analysing all aspects of such efforts.
“History was written by seeing events through the British viewpoint…but what these historians forget is that the day Bhagat Singh was hanged, households from Lahore to Kanyakumari went hungry. His martyrdom instilled a never-ending sense of patriotism in all Indians,” said Shah. He also gave the examples of Bankim Chandra Chattopadhyay, recalling how by penning ‘Vande Mataram’ he evoked patriotism among Indians, and Subhash Chandra Bose, who through the Indian National Army, awakened the youth. “But INA’s efforts did not receive due respect and recognition,” he pointed out.
“Many like me believe that it was the patriotic sentiment ignited by the First War of Independence that led to the success of the freedom struggle. Had there not been a parallel stream of armed revolution, Independence may have taken a few more decades,” the home minister said. He said the 1857 war gave the idea of ‘swaraj’ to Indians for the first time after the era of Shivaji. He said all sections of people, including literary people, farmers and tribal communities, played a role in the freedom struggle.
While praising Sanyal for trying to set the narrative right on the contribution made by revolutionaries in India’s freedom struggle, he stated: “In this book, along with the revolutionaries, their ideals, the interpretation of the thinking of the revolution, their feelings and the tragedies faced by them…have all been strung together and presented seamlessly”.
Shah also called upon history teachers and students to rewrite history “without twisting facts” and free from “the colonial mindset” and identify 300 individuals who have contributed in making India a great nation.