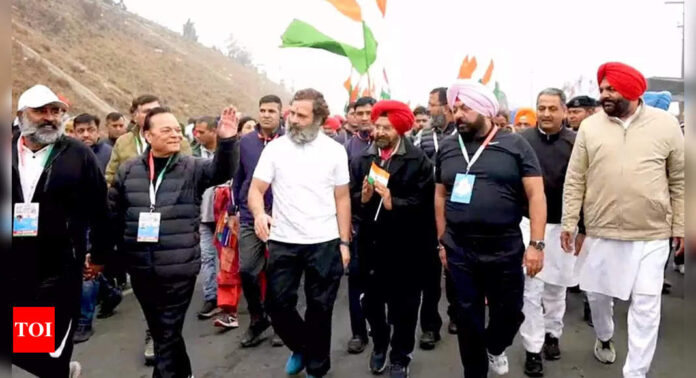 JALANDHAR: Congress MP from Jalandhar, Chaudhary Santokh Singh (76), collapsed and died just as Rahul Gandhi‘s Bharat Jodo Yatra crossed Phillaur in Jalandhar district of Punjab on Saturday morning. After Singh collapsed, he was taken to a private hospital in Phagwara in an ambulance accompanying the yatra, where the doctors’ efforts to revive him proved futile.
Dr Jasjit Singh Virk, who attended on the MP, said: “At the hospital, we tried to resuscitate him… Most likely he suffered a cardiac arrest.”
Rahul had resumed the yatra around 7am from Ladhowal in Ludhiana district across the Satluj, and entered Phillaur, where Singh joined him. The yatra had crossed Phillaur and was close to Bhattian village when the MP collapsed around 8.30am.

Congress suspends Bharat Jodo Yatra for a day after MP’s death
The Phillaur constituency was earlier represented by him in the Punjab assembly, but now his son Vikramjit Singh Chaudhary is the local MLA.
“He joined the yatra at Phillaur and took Rahul Gandhi to an ashram on the roadside. They had just come out. I was a few steps ahead when someone, perhaps (former minister) Vijay Inder Singla, shouted that uncle has collapsed. He was still breathing when he was being taken in the ambulance,” his MLA son told TOI.
Tamil Nadu MP Jothmani later said that Singh collapsed just as he started a conversation with her. In her tweet later, she recalled, “‘How are you Jothi, this is my constituency,’ and then just collapsed.”

As the information about his death reached Rahul Gandhi, he left the yatra midway and later went to Singh’s residence in Jalandhar to offer his condolences.
He stayed with the family for over 40 minutes and later also posted photos of the MP walking with him in the yatra. Singh had gathered representatives of different religions and from a stage set at Phillaur he raised slogans of Bharat Jodo.

Congress MP and general secretary Jairam Ramesh announced that the yatra was suspended for the day, and it would resume from Khalsa College ground in Jalandhar on Sunday afternoon.
He also said that the press conference scheduled to be addressed by Rahul Gandhi on January 15 in Jalandhar had been rescheduled for January 17 at Hoshiarpur.

I too just cannot believe he is no more. Such a warm person always smiling. https://t.co/c6hi0mxbUk