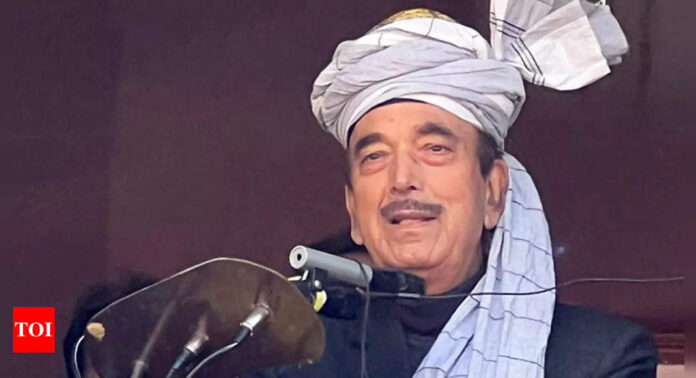 JAMMU: Alleging that the Congress is “begging” for crowds from regional parties for the success of the Bharat Jodo Yatra in Jammu and Kashmir, the Democratic Azad Party (DAP) headed by Ghulam Nabi Azad on Wednesday said the local leadership of the national party are misleading Rahul Gandhi on the ground reality.
The DAP’s remarks came a day after Gandhi said 90 percent of Azad’s colleagues have returned to the Congress fold and now he has been left alone.
“The Congress leader is misled by the people surrounding him about the facts and ground situation. The reality is that the DAP has white washed Congress in J-K,” DAP general secretary and former minister R S Chib said in a statement here.
Referring to former deputy chief minister Tara Chand and former MLA Balwan Singh who returned to the Congress, Chib said they, along with former minister Manohar Lal Sharma, were expelled from the party by the DAP chairman.
“While one (Sharma) who holds the constituency later re-joined the DAP, the remaining two have no political constituency,” he claimed.
Chib said the desertions in the Congress after the formation of the DAP has rattled the grand old party at the core and is now working in damage control mode. “Ever since the Bharat Jodo Yatra entered Jammu and Kashmir, the local leadership (of Congress) has been begging for the crowds to local political parties. They have lost their ground in Jammu and Kashmir and that is the reality.”
Accusing Gandhi of faking his love and sympathy for the people of J-K, Chib said the Congress is maintaining a “deliberate silence on issues like Article 370 abrogation, land, jobs and the recent terror strikes in Jammu and Kashmir.”
“Even he is walking alongside the leaders who spoke against the Indian Army. Taking along such anti-national elements reflects the mindset of the Congress towards the nation,” the DAP leader, apparently referring to Congress leader and former Madhya Pradesh chief minister Digvijaya Singh who triggered a controversy by questioning the surgical strikes.
Gandhi himself had snubbed Singh, termed his comments “ridiculous” and said the armed forces are doing their job “exceptionally well” and do not need to give any proof.