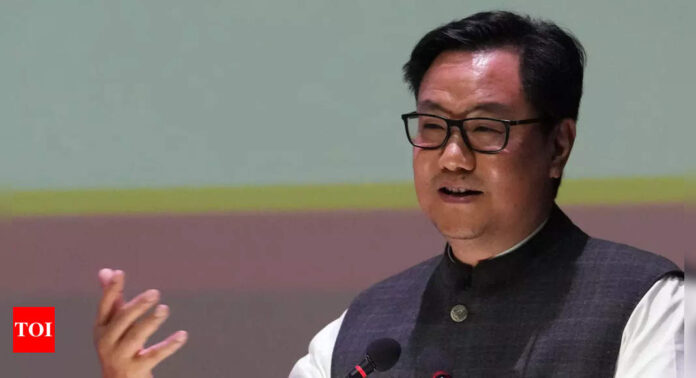 NEW DELHI: Law minister Kiren Rijiju on Wednesday said comprehensive consultations with stakeholders, including political parties, are essential for implementing electoral reforms.
His remarks came against the backdrop of a fresh push by the poll panel for electoral reforms, including the use of remote voting technology to allow migrant voters to exercise their franchise without going to their home states.
Earlier this month, the Election Commission had held consultations with recognised political parties on this matter.
Referring to various proposals on electoral reforms moved by the EC, he said consultations and discussions are “symbols” of a vibrant democracy.
Rijiju said the changes made in election laws a year ago have resulted in addition of over 1.5 crore new voters to the electoral list.
Four cut-off dates instead of the one earlier have helped young eligible citizens to register as voters once they turn 18, he said.
The minister also lauded the move to allow those above 17 years of age to register with the EC in advance. Once they turn 18, their names are added to the voters’ list.
Addressing the 13th National Voters’ Day event here in the presence of President Droupadi Murmu, Chief Election Commissioner Rajiv Kumar, companion election commissioners and representatives of various political parties, Rijiju recalled the role of various unsung heroes who have not been awarded but have made sacrifices while helping hold free and fair polls.
On the issue of electoral reforms, the minister said he is in constant touch with the Election Commission and has been holding meetings with officials of the poll panel on the issue.
The legislative department in the Union law ministry is the nodal agency for issues related to the poll panel, including election laws and related rules.
Various EC proposals related to poll reforms are with the government. The convention is to consult political parties and at times seek the views of ordinary citizens before moving ahead with such reform proposals, he said.
“It is a symbol of a vibrant democracy to move forward only after consultations and discussions,” he noted.
In the recent past, the poll panel had proposed bringing down anonymous political donations from Rs 20,000 to Rs 2,000 and capping cash donations at 20 per cent of the total contribution or at a maximum of Rs 20 crore to cleanse election funding of black money.
CEC Kumar had written to Rijiju recommending a slew of amendments to the Representation of the People Act. The proposals are aimed at ushering in reforms and transparency in donations received by political parties, and also in the expenditure incurred by candidates at the hustings.
Reviving a nearly two-decade-old proposal, the Election Commission has also made a fresh push for amending a law to bar people from contesting from more than one seat and has said that if it cannot be done, then a hefty fine should be imposed on those vacating one of the constituencies and forcing a bypoll.
As electoral law stands today, a candidate is permitted to contest an election from two different constituencies in a general election or a group of by-elections or biennial polls. If a person is elected from more than one seat, then the person can only hold on to one of the seats that he or she won.
The poll panel has batted for lowering the threshold limit for cash donations made to political parties from Rs 20,000 to Rs 2,000.
According to rules in force currently, political parties have to disclose all donations above Rs 20,000 through their contribution report that is submitted to the EC.
If the EC’s proposal is approved by the Law Ministry, all donations above Rs 2,000 shall be reported through the contribution report, thereby enhancing transparency in funding.
The EC has also sought to restrict cash donations at 20 per cent or at a maximum of Rs 20 crore out of the total funds received by a party, whichever is less.
As part of bringing transparency in the expenditure made by individual candidates contesting polls and to remove “fungibility” in this expenditure, the poll panel has sought that digital transactions or account payee cheque transfers should be made mandatory for all expenses above Rs 2,000 to a single entity/person.
Government sources said once this amendment — to be made in Rule 89 of the Conduct of Election Rules, 1961 — is carried out, a candidate would have to maintain a separate account for receipt and payments related to elections and has to be transparently disclosed to authorities, as an account of election expenditure.
As of now, maintaining a separate bank account for poll expenditure is part of the instructions but EC wants it to become part of the Conduct of Election Rules.
The Law Commission has, meanwhile, sought fresh views from various stakeholders, including political parties and the EC, on simultaneous elections based on six questions flagged by the previous panel in its draft report on the politically sensitive subject.
The 22nd law panel had brought out a public notice last month seeking the views of stakeholders.