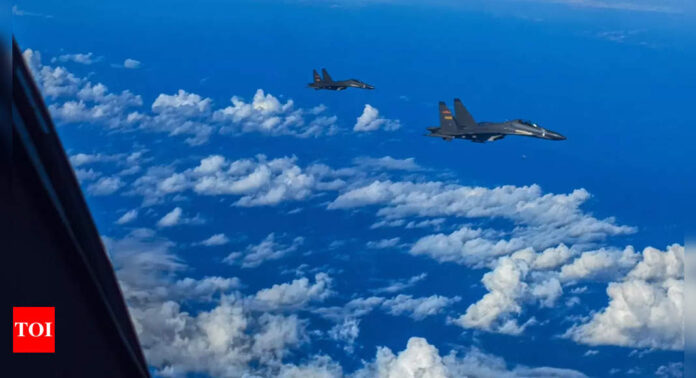 TAIPEI: China’s warplane incursions into Taiwan’s air defence zone nearly doubled in 2022, with a surge in fighter jet and bomber sorties as Beijing intensified threats towards the island democracy.
Self-ruled Taiwan lives under constant threat of invasion. Communist Party rulers claim the island as part of China’s territory and have vowed to seize it one day.
Relations have been icy for years under President Xi Jinping, China’s most assertive leader in a generation.
But 2022 saw a deeper deterioration, as Xi’s military ramped up incursions and launched the largest war games in decades to protest against a visit by US House speaker Nancy Pelosi in August.
China sent 1,727 planes into Taiwan’s air defence identification zone (ADIZ) in 2022, according to an AFP database based on daily updates released by Taipei’s defence ministry.
That compares with around 960 incursions in 2021 and 380 in 2020.
Fighter jet sorties more than doubled from 538 in 2021 to 1,241 while incursions by bombers, including the nuclear-capable H6, went from 60 to 101.
Last year also witnessed the first incursions by drones, with all 71 reported by Taiwan’s military coming after Pelosi’s visit.
Military analysts say China has used the incursions to probe Taiwan’s defences, exhaust its ageing air force and voice displeasure over Western support for Taipei, especially the United States.
“They want to show their determination, their will and to coerce the United States: don’t get too close to their red lines, don’t cross their red lines,” Lee Hsi-min, Taiwan’s former chief of general staff, told AFP.
The United States recognises China over Taiwan diplomatically, but remains Taipei’s most important ally.
It opposes any forced change to Taiwan’s status and is bound by an act of Congress to supply the island with the means to defend itself.
Support for Taiwan is a rare issue of bipartisan consensus in Washington and there has been growing alarm over whether China might resort to a military solution, a fear heightened by Russia’s invasion of Ukraine.
Washington has maintained a policy of “strategic ambiguity” towards Taiwan, deliberately making no firm commitment on whether it would come to its defence.
That strategy was aimed at making Beijing think twice about the costs of any invasion, and also to deter Taiwan from formally declaring independence.
US President Joe Biden has been mercurial on the issue of strategic ambiguity.
He has repeatedly said US troops would come to Taiwan’s aid in the event of a Chinese invasion, only for the White House to walk back his comments.
China has used warplane incursions to voice its displeasure against specific events.
It sent 71 warplanes to conduct a “strike exercise” on December 25 in response to what it described as “escalating collusion and provocations” by Washington and Taipei.
That came days after Biden signed off on up to $10 billion in military aid to Taiwan.
August saw a record 440 sorties by Chinese warplanes, the same month Pelosi became the highest-ranking US lawmaker to visit Taiwan in 25 years.
“The more frequent sorties are worrying and compel the Taiwanese side to be in a perpetual state of alert to ensure that the PLA (People’s Liberation Army) does not use them as cover for an attack against Taiwan,” Taipei-based political and military analyst J Michael Cole told AFP.
However, he also said a rise in incursions “does not signify that (China) is ready to use force at an earlier date against Taiwan — at least not an invasion scenario, which would require months of mobilisation”.
Many nations maintain air defence identification zones, including the United States, Canada, South Korea, Japan and China, which are not the same as a country’s airspace.
They instead encompass a much wider area in which any foreign aircraft is expected to announce itself to local aviation authorities.
Analysts say China’s increased probing of Taiwan’s defence zone is part of wider “grey-zone” tactics that keep the island pressured.
“The PRC (People’s Republic of China) is launching a war of attrition on the Taiwanese military,” said Richard Hu, deputy director of National Chengchi University’s Taiwan Centre for Security Studies.
While China intends to collect crucial intelligence and “readiness parameters”, such as how quickly and from where Taiwan’s interceptions take place, an invasion remains a hugely risky and costly endeavour.
The mountainous island would be a formidable challenge for any military to conquer.
“In terms of taking Taiwan by force, PRC is still confronting a number of vital challenges such as sending hundreds of thousands of troops across the Taiwan Strait,” said Hu, a retired Army major general.