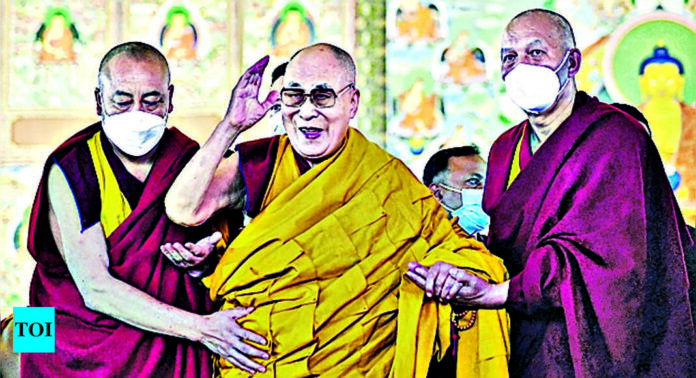 GAYA: China is systematically trying to destroy Buddhism but can’t crush people’s faith in the Buddha, the Dalai Lama said Saturday, referencing the communist government’s demolition of the statue of Padmasambhava in early March, the third such destruction since December 2021 and the second in Drago county of Tibet since January 2022.
“In a bid to destroy Buddhism, the monastery built in China was demolished. Our people were poisoned. China did everything possible to harm Buddhism,” he said this on the concluding day of his three-day teaching programme in Bodh Gaya.
‘Buddhism stands at its place’
“Despite this, Buddhism stands at its place. There are a large number of people who believe in Buddhism in China as well. Harming someone does not put anyone’s religion in danger. Even today, the followers of Buddhism in China are engaged in praying before Lord Buddha,” he said.
Earlier in the morning, the Dalai Lama offered prayers at the Kalachakra ground to free the world of coronavirus and nuclear weapons.
Highlighting the religious importance of Bodh Gaya, he said,”You remember the form of Lord Buddha in your mind. And after that offer flowers on this holy land keeping in mind the colour of the form of 21 Arya Taras. Think that I am offering flowers to Lord Buddha. This is a holy place. Everything can be obtained from here.” A sum of Rs 30 lakh was donated by the Dalai Lama to the PM Relief Fund and Rs 20 lakh to the Bihar CM Relief Fund during the programme.
On Sunday morning, he would be attending a prayer offered to him in the Geluk Tibetan Buddhist tradition.