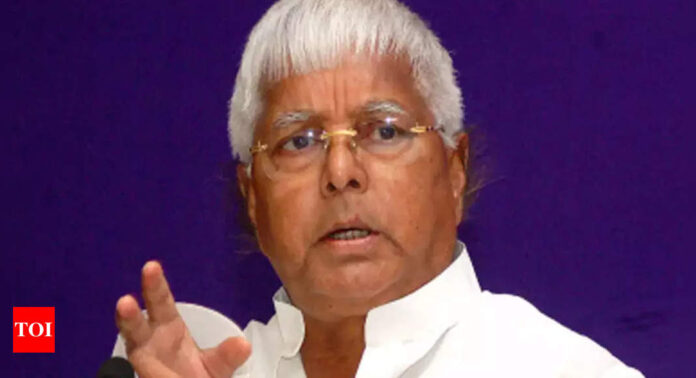 NEW DELHI: The Central Bureau of Investigation has got the Centre’s sanction to prosecute former railways minister Lalu Prasad Yadav in connection with the land-for-jobs scam, officials said on Friday. The agency submitted the sanction before a special court on Friday, they said.
Sanction to prosecute from the competent authority is a prerequisite for the special court to take cognizance of the charge sheet filed by the agency, they said.
The CBI had filed on October 7 last year a charge sheet against Yadav, his wife Rabri Devi and 14 others in connection with alleged appointments made in the Railways in return for land parcels gifted or sold to his family but the cognisance was pending.
In its charge sheet filed before a special CBI court here, the agency has also named Prasad’s daughter Misa Bharti, former general manager of Central Railways Sowmya Raghvan, former CPO Railways Kamal Deep Mainrai, seven aspirants appointed as substitutes and four private individuals.
“During the investigation, it has been found that the accused in conspiracy with the then GM, Central Railways, and CPO, Central Railways, engaged persons as substitutes in lieu of land either in their name or in the name of their close relatives,” a CBI spokesperson had said in a statement.