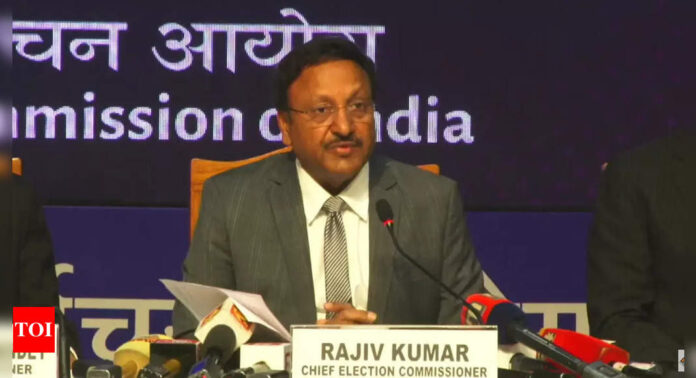 NEW DELHI: Chief election commissioner Rajiv Kumar on Wednesday said the Election Commission will carry out its mandate of holding J&K polls “at the right time” after taking into consideration factors like weather, security concerns and other state polls which aredue.
“The process of delimitation; special summary revision (of electoral roll); identifying, fixing and rearranging of polling stations after delimitation; and appointment of returning officers for the constituencies wherever changes have taken place. . . is complete.
We are conscious that in any place which is due for elections, it’s our duty that it gets a government in place as mandated, and we will arrive at this at the right time with the weather condition, security condition and schedule of other states put together, and all the other factors which we take into account,” he said at a press conference here after announcing poll schedule for Tripura, Nagaland and Meghalaya.
He strongly countered doubts being raised afresh by some opposition leaders on EVMs. He said reliability andtamper-proof nature of EVMs had been upheld in various court judgments, which had over the years held that there was no question of introducing a bug, invalid votes or rigging with respect to EVMs. Asked about the January 16 all-party meeting on EC’s remote voting machine proposal, the CEC said it was a success around 50 parties patiently listened to each other and agreed that there was a need for all (stakeholders) to come together to address the issue of 30 crore voters who had stayed out of the voting process in the last general elections. “We are hopeful that it’s a work in progress,” he said.