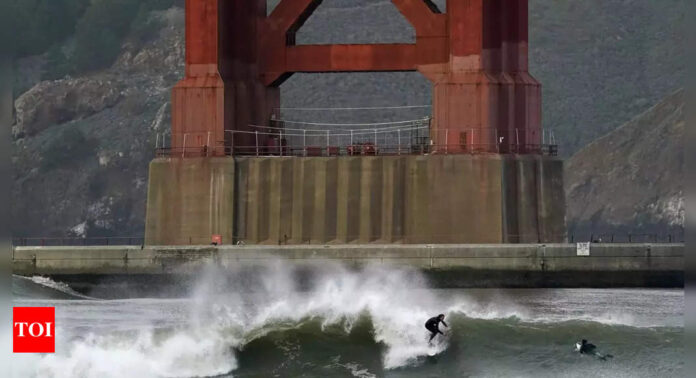 SANTA CRUZ: Utility crews in northern California worked to restore power to tens of thousands of homes on Friday following two days of fierce winds and torrential rain, even as the region braced for another onslaught of stormy weather heading into the weekend.
The next bout of heavy showers and gusty winds was expected to sweep the northwestern corner of California late on Friday and spread southward into the San Francisco Bay Area and central coast through Saturday and Sunday, the National Weather Service (NWS) said. Southern Oregon was also forecast to take a hit.
The coming storm – another “atmospheric river” of dense moisture flowing in from the Pacific – is likely to dump several more inches (cm) of rain on a region already saturated from repeated downpours since late December, renewing risks of flash flooding and mudslides, the NWS said.
Hillsides and canyons stripped bare of vegetation by past wildfires are especially vulnerable to rock and mudslides according to forecasters.
In addition to heavy rains, up to 2 feet (60 cm) of snow was expected to fall over the weekend in higher elevations of the Sierras, where accumulations of a foot to 18 inches (46 cm) or more were measured earlier this week.
On Friday much of the northern two-thirds of California, the most populous state in the United States, was under flood watches, gale-force wind advisories and winter-storm warnings as forecasters urged residents to prepare for the deluge and stay off roads in flood-prone areas.
The ominous forecast comes on the heels of a massive Pacific storm that unleashed hurricane-force wind gusts, pounding surf, soaking rains and heavy snow across California for two days. The northern portion of the state was hardest hit.
As of Friday morning, some 60,000 homes and businesses remained without electricity in several northern California counties because of the weather, according to data from Poweroutages.us.
Howling winds uprooted trees already weakened by prolonged drought and poorly anchored in rain-soaked soil, taking down power lines with them and blocking roadways across the region. Road travel was also disrupted by flash floods and rock slides.
HIGH SURF
High surf and runoff from heavy rains combined to flood several blocks in the seaside city of Santa Cruz, and heavy waves tore up wooden piers in the adjacent town of Capitola and nearby Seacliff State Beach.
Farther north, pounding waves broke through the rear doors of the historic Point Cabrillo lighthouse in Mendocino County, flooding its ground-floor museum, the Mendocino Voice newspaper reported.
The two-day storm, which ended Thursday night, was powered by an immense atmospheric stream of moisture from the tropical Pacific and a sprawling, hurricane-scale, low-pressure system known as a bomb cyclone.
It marked the third and strongest atmospheric river to strike California since early last week. Research predicts that climate change is increasing the frequency and intensity of such rain storms, punctuating extensive periods of extreme drought.
At least six people have died in the severe weather since New Year’s weekend, including a toddler killed by a fallen redwood tree crushing a mobile home in northern California.
The rapid succession of storms left downtown San Francisco drenched in 10.3 inches (26 cm) of rain from Dec. 26 through Jan. 4, the wettest 10-day stretch recorded there in more than 150 years, since 1871, according to the NWS.
The highest all-time rainfall total ever documented over 10 days in the city’s downtown was 14.37 inches (36.5 cm), an 1862 record the NWS said would likely stand through the downpours to come.
The storms have brought welcome replenishments to Sierra Nevada snowpack, a critical source of California’s water supply, but experts say much more snow will need to fall through the winter to markedly improve the state’s grave drought situation.
For better or worse, the weather service predicted that yet another, “likely stronger,” atmospheric river storm was “on the horizon for Monday,” part of a larger pattern that forecasters believe is likely to persist at least through the middle of January.