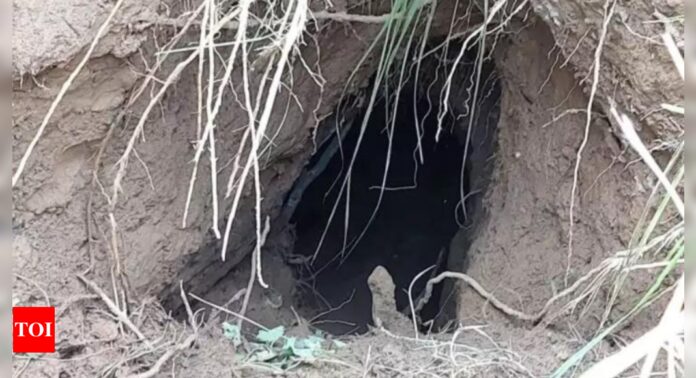 NEW DELHI/JAMMU: Drone-mounted ground penetration radars have been deployed for the first time by the Border Security Force (BSF) to check for the presence of under-ground tunnels used by terrorists to infiltrate the India-Pakistan International Border in Jammu region, officials said.
The indigenously-made technical gadget has been pressed into action at this front recently as part of the below-the-earth tunnel detection exercise carried out by the force to ensure no terrorist is able to sneak into Indian territory and conduct strikes in Jammu and Kashmir or any other location of the country. These structures have also been used to smuggle narcotics, arms and ammunition.
The BSF has unearthed at least five under-ground tunnels in the about 192 km of the Jammu front (of the India-Pakistan IB) in the last three years.
According to official data, two such cross-border tunnels were detected in 2020 and 2021 each, while one was found last year and all of them were detected in the Indreshwar Nagar sector of Jammu.
“The force has procured a smart technical tool to counter the menace of under-ground tunnels that have been reported regularly along the Jammu region of the India-Pakistan IB. More than one drone-mounted ground penetration radars have been deployed in the region to check these clandestine structures used by terrorists to infiltrate into India from Pakistan,” a senior BSF officer told PTI.
Officials working on the ground said the radars being currently deployed have been developed by an Indian manufacturer and they work by emitting strong radio waves to check for the presence of tunnels under the ground and to map their stretch. While the specific details of the radars cannot be disclosed, the new tools have been added to the BSF surveillance paraphernalia for assisting ground troops undertaking anti-tunnelling exercise.
Its efficacy is under study as of now, the officials said.
The radars are mounted on the drones in order to give them better access to such terrain along this front, which is difficult for the ground teams to reach, they said. Usually the surveillance for hidden tunnels is undertaken in the range of about 400 metres from the border fence.
The anti-tunnelling surveillance teams of the BSF remotely control the drone when they are out to comb a specific area on the front and they backup the ‘flying radar’ with their traditional system of checking for tunnels with the help of hand-held deep search and mine detection tools, they said.
“One problem that these radars come across is the amount of dust that generates due to the flying of drones and they clash with the radio waves being emitted by the radars to scan the earth below. This is a start and the new tool is still to be called accurate,” another officer said.
The usual system of ground troops checking for tunnels is being followed too. The ‘man behind the machine’ concept will always be the most important tool despite the best technical gadgetry available, the officer working along the Jammu front said.
The 192-km long Jammu IB– out of the total 2,289-km long front running down towards Punjab, Rajasthan and Gujarat– is prone to both old or dormant and freshly-dug tunnels due to the loose soil structure of the area and the BSF, that is mandated to guard this front, has detected almost ten such structures over the last decade here. Tunnels pose a major threat to anti-terrorist operations because sneaking of terrorists from under the ground is hard to detect as compared to infiltration from the ground by either slipping through the unfenced riverine areas or by breaching the fence. “The BSF along with other security stakeholders can claim that there has been zero infiltration from across the border unless someone can prove it. The under-ground tunnels are the second terrorist route that needs to be plugged effectively,” the senior officer based in Jammu said.