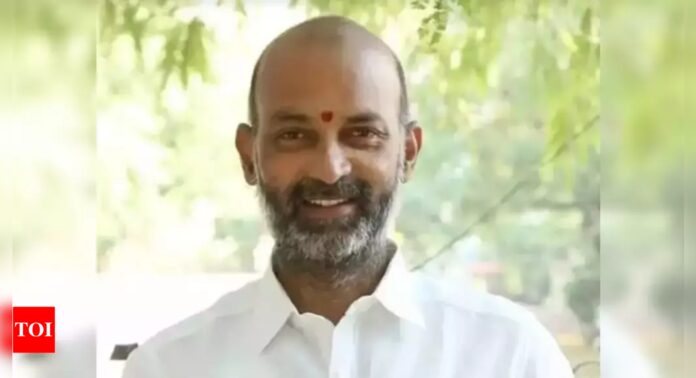 NEW DELHI: Telangana BJP chief Bandi Sanjay was the centre of attraction at the BJP National Executive on Monday as Prime Minister Narendra Modi praised the Praja Sangram Yatra and asked all the states to learn from his journey.
PM Modi appreciated Sanjay on how they have made this journey with struggle.
“On the first day of the National Executive, Bandi Sanjay gave a presentation on Praja Sangram Yatra. This presentation lasted for about 1 hour, in which he told how he did strategic planning and how he completed this journey despite the constant obstacles and what is the planning ahead,” an important source of BJP told ANI.
Bandi Sanjay started the presentation in Hindi language but the Prime Minister asked him to give the presentation in the Telugu language because the PM was understanding that Sanjay Bandi would be able to express this presentation better in his own language.
The Prime Minister said that he didn’t want the language to create a barrier.
“You have a lot of feelings, how you have completed this entire journey, you have put in efforts to make us understand”.
However, the Telugu presentation of Bandi Sanjay was translated later by Tarun Chugh, BJP in-charge of Telangana.
Paying special attention to Prime Minister Modi’s words, both Vasundhara Raje and Raman Singh in the National Executive worked to understand and learn from Bandi Sanjay on all aspects of the Praja Sangram Yatra as the assembly elections are due in both their states.
Whether it is Rajasthan or Madhya Pradesh, an important program to ensure victory, which is going on in Telangana, the discussion on it started with the BJP National Executive itself.
In the presentation of the Praja Sangram Yatra, Bandi Sanjay said that the Yatra took place in five phases. So far, for interaction with people, public meetings, temple visits, cohort meetings, large public meetings, and major issue-based meetings have happened covering 6 Lok Sabha constituencies, 11 Vidhan Sabha constituencies and 18 districts in 116 days.
9,776 people joined the website, while 42,940 missed calls were received for people to join.
Praja Sangram Yatra has been conducted in 5 phases, the success rate of which was very high. This is the reason why Prime Minister Modi has also asked all the states to learn from Bandi Sanjay’s struggle and the positive results that have come after that. However, according to sources, Bandi Sanjay will soon start the bus journey.
Describing the impact of the Praja Sangram Yatra, Bandi Sanjay said that the effect of this yatra has been so much that now the BJP wave is visible in Telangana.
“The people have made up their minds to overthrow the present government. Due to the yatra, massive anti-incumbency has been established against the TRS government,” claimed Bandi Sanjay.
Bandi Sanjay further said that the yatra has strengthened the organization at the grassroots level and people have realized that BJP is an alternative to TRS. The large public gatherings have increased the faith and enthusiasm of the people towards the BJP, especially in the villages.
The caste-based Yatra has also made all the caste groups believe that BJP is always benevolent towards them, claimed Bandi Sanjay.