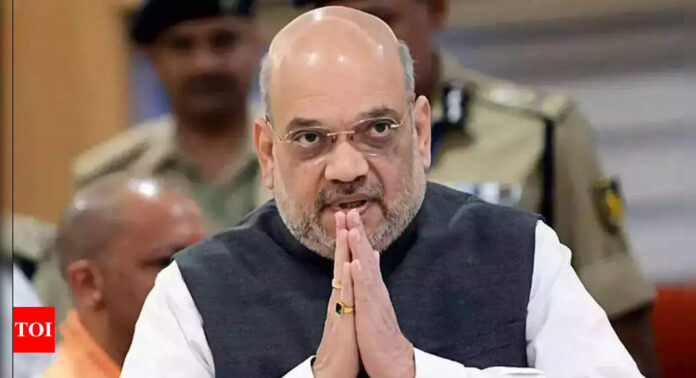 IMPHAL: Union home minister Amit Shah on Friday asserted that the BJP government in the state freed Manipur from bandhs and terrorism and brought it on the path of development.
Addressing a public rally at Moirang in Bishnupur district after virtually inaugurating 12 projects worth Rs 300 crore and laying the foundation stone of nine projects worth Rs 1,007 crore, Shah said the BJP government defeated insurgency and lifted Armed Forces (Special Powers) Act, 1958 or AFSPA from six districts of the state.
“There was a situation of terror during the Congress rule in Manipur. Now, it is among the best governed small states,” he said.
Shah said the BJP-led government at the Centre has invested Rs 3.45 lakh crore in the Northeast in less than eight years and Prime Minister Narendra Modi has visited the region 51 times during this period.
Noting that the N Biren Singh government in the state is undertaking massive operations against drug trafficking and abuse, he said the BJP will make Manipur drug-free by next election.
Projects inaugurated by him include the Manipur Olympian Park at Sangaithel, a paid private ward at state-run Jawaharlal Nehru Institute of Medical Sciences (JNIMS), Moreh town water supply scheme, Nongpok Thong Bridge at the eastern side of Kangla Fort and cave tourism project at Kangkhui cave.
Foundation stones were laid for the construction of 40 police outposts, 34 of which will be along the India-Myanmar international border and six along National Highway 37.
Earlier in the day, he hoisted the tricolour at the Indian National Army (INA) headquarters at Moirang, inaugurated a medical college in Churachandpur and unveiled a 120-foot-high statue of a polo player in Imphal East district.