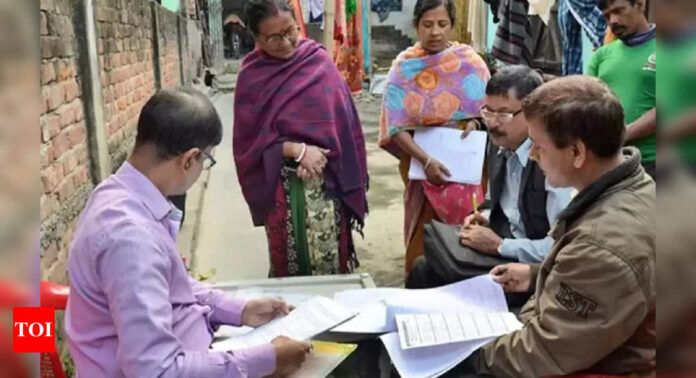 PATNA: A day before the Bihar government starts its caste survey, CM Nitish Kumar on Friday said the exercise would prove helpful for the uplift of every section of society and that it should be conducted at the national level.
During the first phase of the survey, which will continue for a fortnight, the listing of houses and calculation of families and buildings will be done. The second phase will span from April 1 to April 30.
“The caste survey will not only enumerate the current population of the state but will also find out the economic status of every caste. That will help us know what should be done for the uplift of the deprived classes. We want development for all,” Nitish told reporters in Sheohar during his Samadhan Yatra.

He said the workforce to be engaged in the process had been properly trained for the purpose. “We are conducting a caste survey so that we could know what should be done for the growth of the people (left behind in the matter of development),” he said.
Asserting that he wants the caste census at the national level, the CM said the exercise would not only prove beneficial for the country’s development but would uplift every section of society.
Meanwhile, an official at the general administration department said they didn’t have information about the exact number of workforce to be engaged in the exercise. But according to their calculation, around five lakh government employees will be required to complete the exercise till May this year.

The state government is conducting the caste survey at its own expense and around Rs 500 crore is to be spent on the entire exercise, according to a notification issued by the general administration department in June this year.
The state government was compelled to conduct the exercise on its own after the Centre rejected its demand for a caste-based census. The state assembly had unanimously passed a resolution for caste census twice in the past and requested the Centre to consider it. In August last year, an all-party delegation headed by Nitish had called on PM Narendra Modi with a request to look into the demand, but in vain.

Then, Nitish headed the NDA government in Bihar and led the delegation to meet the PM. Although every party from the state had supported the demand for caste census, it was the RJD which strongly backed Nitish despite being in the opposition then. As such, it turned out to be one of the key factors which ultimately brought the arch-rivals, JD(U) and RJD, together, leading to the ouster of BJP from power in Bihar.