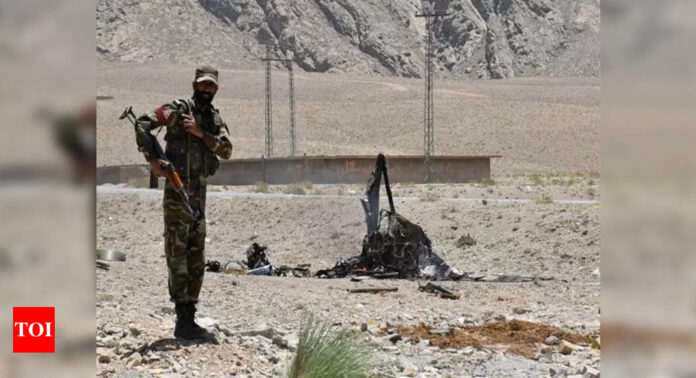 ISLAMABAD: At least 11 terrorists, including two suicide bombers, were killed during an operation carried out by a Pakistani intelligence-based operation (IBO) in South Waziristan, Pakistan’s military media wing said.
According to the statement issued by the Inter-Services Public Relations (ISPR) on Thursday, the Pakistani security forces killed Hafeezullah Tore alias Tore Hafiz, whom the officials termed a “militant commander.”
“During intense exchange of fire, 11 terrorists, including terrorist commander Hafizullah alias Tor Hafiz and two suicide bombers, were killed,” the ISPR said.
The statement added that a large number of weapons and ammunition were also recovered from the killed terrorists.
The statement further added that the killed terrorists were actively involved in terrorist activities against security forces and targeted killing of police in the South Waziristan district.
Over the past few months, the law and order situation in Pakistan has worsened, with terrorist groups like the outlawed Tehreek-i-Taliban Pakistan, the Islamic State group, and the Gul Bahadur Group executing attacks with near impunity across the country.
Earlier, TTP attacked a Pakistan government contractor, Mohammad Nisar‘s house, who was asked to pay a ransom of Rs 15 million which he refused. He alleged that the TTP member attacked his house in Rawalpindi’s Dhamial area with a cracker after he refused to pay the ransom, reported The Dawn.
Pakistan’s Counter-Terrorism Department (CTD) was also involved in the case’s investigation after a first information report (FIR) was registered with the police on Tuesday.
Nisar in the FIR said that on October 7, 2022, he received a voice message on his phone. The caller who identified himself as a representative of the TTP demanded a ransom of Rs 15 million.
Nisar said that after he ignored the man’s messages, he turned towards his brother Mushtaq Ali. He sent a voice message to Ali, asking him to show it to his brother.
Nisar has for the past 20 years been working as a government contractor in Pakistan, according to Dawn.
Nisar in his FIR said he was sleeping in his home, while his wife and children had gone to their village when he woke up upon hearing an explosion from outside his house at 4 pm on December 28, reported The Dawn.
About 1,000 people were killed and injured in attacks by the Tehreek-e-Taliban Pakistan on the Pakistan government in 2022, according to statistics published by the TTP terrorist group, Khaama Press reported.
TTP said in a video, that most of their attacks took place in the Khyber Pakhtunkhwa province of Pakistan. They also launched attacks outside the province, Khaama Press reported.
The surge in attacks came after the TTP ended its ceasefire with the government last year in November, ordering its militants to carry out attacks throughout the country.
Insurgents in Balochistan have also stepped up their violent activities and formalised a nexus with the TTP, as per Dawn report.