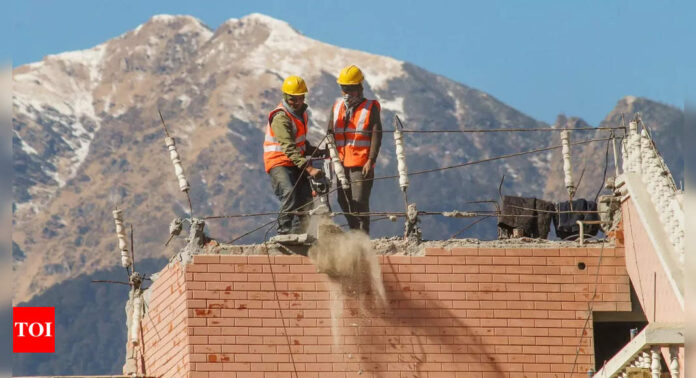 DEHRADUN: In a significant development, the Uttarakhand government on Monday decided to “mechanically demolish” structures at Jaypee Residential Colony in Joshimath that cannot be retrofitted or repaired to reduce the burden on the slope said to be accountable for the situation in the town. This would be the second major demolition exercise after the administration a few days ago began to raze two of Joshimath’s biggest hotels.
There are over 30 houses in the colony, many of them with large cracks, which a resident said “seem to be getting bigger.” Apart from these, even culverts that have developed fissures will be razed.

Areas above Joshimath also damaged: U’khand SDMA secy
In the colony is also a badly affected badminton court and swimming pool.
During his second visit to Joshimath on January 11, CM Pushkar Singh Dhami had met the affected families in the town and assured the distraught residents that “unless unavoidable”, houses in the town won’t be demolished and requested them to not be “misled by rumours”. The CM had also directed the chief secretary not to raze any houses unless unavoidable and instructed him to hold regular interactions with locals to resolve their issues at the earliest.

Chamoli district magistrate Himanshu Khurana has been directed to inform the stakeholders that the damaged structures are to be removed at the earliest. The structures would be mechanically razed on the lines of the proposed demolition of the two hotels at Joshimath – Mount View and Malari Inn.
Speaking on the latest development, Uttarakhand State Disaster Management Authority secretary Ranjit Kumar Sinha said: “To get a clearer picture of the situation, this time we went to the other side of Joshifmath – towards Haathi Parvat – and tried to find out the depression and its likely solution.”

Uttarakhand crisis: Work on demolition of hotel underway in Joshimath

During the recent inspection, a team led by Sinha, comprising experts of various state agencies, found that one side of JP Colony in Marwari ward is damaged in a straight line. “Areas above Joshimath on the same line like Singhdhar and Sunil – which are on the upper side of the hill town – are also damaged. The damaged line is clearly visible and appears like a depression. It looks like a stream, ‘Singhdhar dhara’, was earlier flowing through the area and the water has leaked in the same line,” Sinha said.
On being asked about the number of structures to be demolished, Sinha said, “The Chamoli DM has been directed to conduct a survey and finalise the number of such structures… damaged superstructures like houses or culverts have to be removed at the earliest. The demolition has to be scientifically done. “

Meanwhile, experts from Hyderabad’s National Geophysical Research Institute and the Central Building Research Institute, Roorkee, started an “intensive geophysical survey” of the area in Joshimath on Monday. Residents are being asked to move to safer locations based on the scientific analyses of expert teams on the ground.
The experts are trying to find the source of the water and the fissures to fix the issue of cracks showing up in the houses of the town.