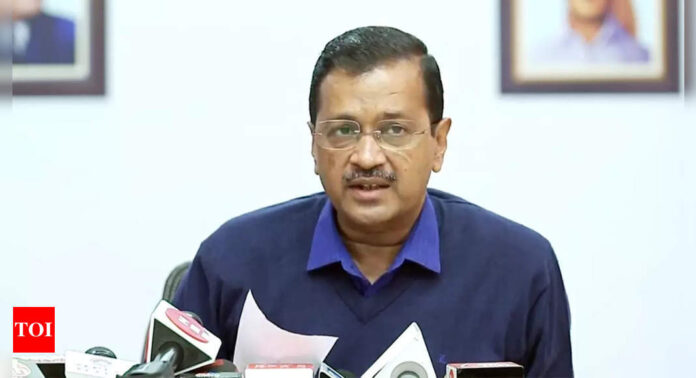 NEW DELHI: Rajasthan is set to witness a three-cornered fight in the assembly polls likely to be held later this year with the Aam Aadmi Party (AAP) on Thursday setting in motion preparations for the launch of its foray in the state, currently ruled by the Congress.
AAP’s poll strategist Sandeep Pathak held a crucial meeting with the party’s Rajasthan unit leaders and volunteers here, and asked them to pull up their socks to make the party’s foray in the Congress-ruled state a success.
AAP’s election in-charge for Rajasthan Vinay Mishra was also present in the meeting which reviewed the work done by the party so far towards strengthening the organization’s base in the state and also discussed at length the party’s strategy for the upcoming assembly elections.
Soon after its stupendous victory in Punjab, the Arvind Kejriwal-led party had launched a mega exercise to strengthen its base in Rajasthan and announced that it will contest all 200 seats in the 2023 state assembly polls.
“The meeting, which was held at party headquarters here, reviewed the work that our state unit has done so far in Rajasthan in the past eight months,” a senior AAP leader, who attended the meeting, told PTI.
Besides, AAP’s national general secretary (organization) Pathak also held one-on-one meetings with the party’s leaders and volunteers from Rajasthan to understand the ground situation in the poll-bound state, the party leader added.
“Feedback that has come from Rajasthan is quite encouraging. There is so much energy on the ground as we have succeeded in setting up a strong base of our organisation across the state,” AAP’s Rajasthan incharge Mishra told PTI.
“We are ready to contest all 200 seats in the Rajasthan assembly polls,” he added.
Later, the AAP said in a statement the meeting was convened to discuss the party’s strategy for the Rajasthan assembly polls as well as to get suggestions and feedback from the party’s state unit leaders and volunteers.
“At the meeting, all AAP leaders and workers were instructed to pull up their socks for the elections,” the party said.
Addressing the meeting, Pathak, who is also a Rajya Sabha MP, said there is need for badlav (change) in Rajasthan and exhorted the party’s state unit representatives to lead the fight for the people of the state.
“The people of Gujarat fought in the Gujarat elections, we were just a medium to help. There is a need for change in Rajasthan and being the residents of Rajasthan, you have to take this fight,” the AAP quoted Pathak as saying at the meeting.
Pathak also stressed on the need to further strengthen the party’s base in the state, saying “victory in this fight is only possible when the organization is strong.”
Addressing the meeting, AAP’s Rajasthan incharge Mishra, who is also an MLA in Delhi, said suggestions that came from the party’s Rajasthan unit leaders and volunteers would help the party further strengthen its base.
“Your suggestions mean a lot to us. With the help of your suggestions, not only will a strong organization be formed, but there will also be an opportunity to understand the problems and needs of Rajasthan at the grassroots level,” AAP quoted Mishra as saying at the meeting.