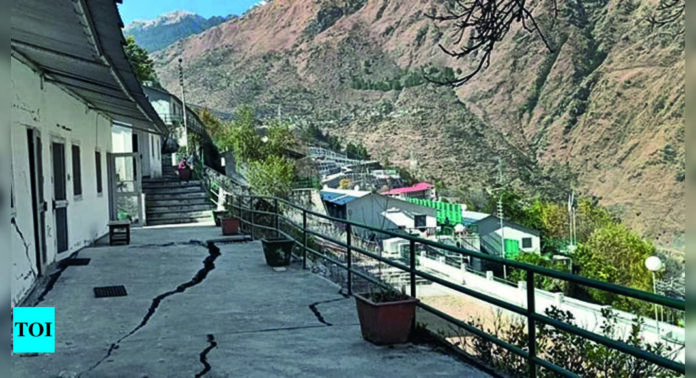 DEHRADUN: In 2022, close to five crore tourists, 3.8 crore Kanwar yatris and 45 lakh Char Dham pilgrims, visited Uttarakhand. While 2022 emerged as the most successful year for tourism in the context of footfall, it has simultaneously raised several questions about the infrastructure availability, carrying capacity of hill towns, scientific study, assessment and several other key factors related to the well-being of the mountains and residents.
Joshimath saw as many as 4.9 lakh visitors in 2019, 4.3 lakh visitors in 2018 and 2.4 lakh in 2017. On similar lines, Char Dham towns had 24 lakh devotees in 2017 and the number nearly doubled to 45 lakh in 2022.

“We need to learn from the experience of Joshimath. A scientific study of hill towns needs to be conducted. We need to know about their carrying capacity, from the visitors and locals’ point of view. In 1976, there were just a few thousand people in Joshimath but due to migration, the number has now gone up to 25,000. There is a limit for each town and we need to keep it in mind,” Anil Joshi, founder of Doon-based Himalayan Environment Studies & Conservation Organisation (HESCO), told TOI.
Padma Bhushan recipient Joshi said, “Because of the repeated negligence by authorities concerned, the Joshimath issue does not come as a shock to me. The issue was flagged in 1976, but no one took note of it. A river is flowing beneath, but no one is bothered and urbanisation is gaining pace. We will have to become more serious towards the environment and also the future of our children.” He advocated that any construction beyond 1,000 metres “must be taken seriously and approved only after a thorough study”.

Anoop Nautiyal, the founder of Social Development for Communities, which has been conducting surveys in the region, said: “If we don’t become alert now, it would not be shocking to say that Joshimath is just the start. Many other Joshimaths-like incidents are waiting to happen in Uttarakhand and it is just a matter of days, weeks, months or years before any similar incident. We have to manage and mitigate the situation.”